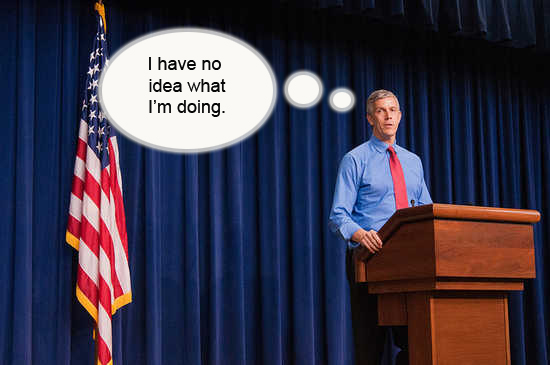 After working with Arne and his staff pre-Obama, I have to say he was my least favorite person to be chosen to head up the Nation’s Education. When Arne left the Chicago schools were just barely staying afloat. Now that he’s gone – there isn’t much change in any direction here. What does that say about Mr. Duncan?

Mr. Duncan’s professional life started playing Ivy League basketball, you know – he endeavored to be a super privileged jock but ended up in education when he (I think) injured himself, says a lot about his ability to prioritize responsibly. Privileged jock dreams transferred into political administration and all.

  A co-worker pointed out the bright side to the man’s career – at least he did manage one of the top three largest school districts in the nation… but now that he’s gone, what’s really changed? How did he get to be the head of Chicago’s schools in the first place and what’s he going to do with the nation’s education? Yay for more out of touch Ivy Leaguers running our country into the dirt.

Anyway, in the melee of our new Secretary of Education I managed to snatch up an anonymously written piece by what appears to be a perturbed stock broker who gives about 99 reasons to loath Arne Duncan. The Examiner link doesn’t work anymore. I only leave it for reference of where the original piece came from. The title doesn’t do it justice.