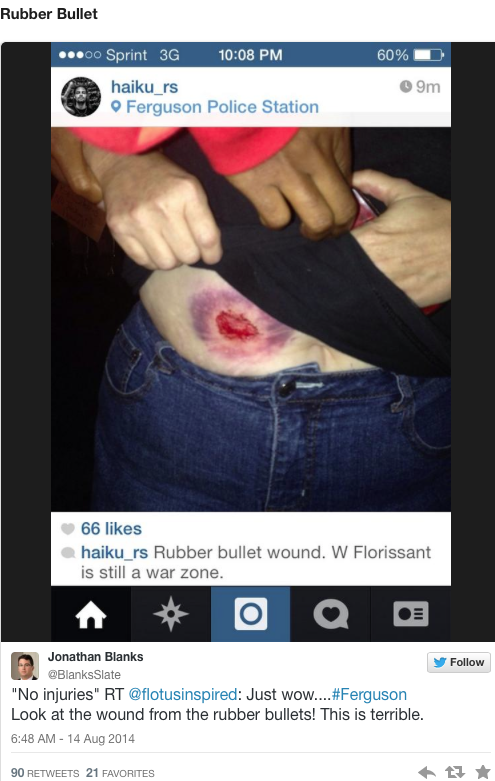 Why The Militarized Police State Matters
AKA – I can’t believe I have to write this out.

Secure in their persons and effects against unreasonable authoritative actions. And probable cause supported by oath or affirmation…
To me, this means if I haven’t been running around with bombs strapped to my chest on my way to the local Froyo, then I shouldn’t have to be escorted there by dudes dressed to kill Taliban on an tank assisted IED clearing assignment. I live in a city where the police force own more helos than the whole state’s counties, combined. The LAPD shine helo lights into homes whenever they feel. I have hundred of videos of this behavior. They send out helos for traffic violations. The send out 30 officers and 3 helos for one jewelry burglar in a store that was already insured for shit like that.

A study done by our own government on how to profile everyone…
http://www.loc.gov/rr/frd/pdf-files/Soc_Psych_of_Terrorism.pdf

The negative psychology of military presence on civilians has been written about as well as the presence of constant noise from choppers, weapons, sirens has been studied. The smaller studies are the best to look over as they are less apt to overlook a dozen factors the larger studies tend to do. Therefore appearing less biased. I only included population studies on military presence/mindset. The loud noise studies are very easy to find on google.

Pretty simple. You can’t use your second amendment right to remove my first amendment right. Or an out of hand protest cannot trump someone’s right to not be tortured through subjugating violence and noise in their neighborhood, unless everyone in that neighborhood are on the same page – then nothing’s forced. Lot of back and forth on this one. Essentially everyone gets what they want, equally. I don’t want my police to trounce all the other amendments I stated about – you do? To bad. Nothing in the constitution allows for you to enact that unless you are trying to make me your enemy. And there’s an amendment for that under treason.

Let’s think about this – no state can take your constitutional rights away. They can’t tell you, you can’t peacefully protest. They really shouldn’t be able to limit your arms rights. This is all should be done on the federal level. And to inflict militarization on a peaceful community, which LA does ALL the time, and what I have seen from the Ferguson police before the curfew was ever enacted, is a deprivation of liberty and any sanity on your own property.

And what intensified the issue?

#Ferguson: Why are they rioting? Because the peaceful protest was attacked. https://t.co/3Cm4pSfFhC

But let’s just take a step back – what was it like before they were provoked? Can you hear children crying? Yea, heart breaking. Something is very wrong with you if  you wish this for their futures and sit there and do nothing about it.

The attacks continued after the curfews but remember the constitutional amendments up above? You leave the media and religion alone. And a curfew should not give any authority any right to treat peaceful people, exercising the First, protected under the Ninth and Fourteenth Amendments, as if they broke the law. UNLESS the protestors give the police a reason like being violent, looting, or pissing the neighbors off with a raves and property damage (like Occupy did), thereby infringing on other’s right’s to enjoy the Ninth. And from the vast majority of the videos and residential comments, available for you all to read and watch online if you can spell better than a kindergardener, the evidence shows peaceful pissed off people trying to address a real issue in the only (unprofitable to lawyers) capacity that has been legally allowed to them. And then getting savaged.

It’s easy to see how close we are to this – (For those who inquire this is a march of peaceful protestors in Bahrain demanding leaders devise a peaceful coexistence between Arabs and Jews. Those rounds getting fired into the crowd? Not rubber bullets. They are buckshots. And when brought up with the authorities they do exactly what U.S. Authorities do – sweep the issue under the rug, promise to retrain the police, and pretend like nothing happened.)

The bottom line is American citizens should not overtly be treated like the enemy. If you feel otherwise, I hear Somalia is a great place to take up residence for many “free market” purposes, including holding your fellow neighbor in hatred, contempt, and suspicion.